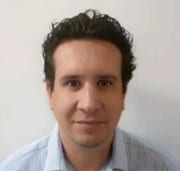 Kostas is a passionate technologist, self-motivated software architect, and pragmatic leader, with in-depth knowledge in integration technologies acquired over 20 years of experience. After receiving his BSc degree in Computer Science from the University of Brunel, he started his professional career in 2001 working in SAP as a consultant in numerous client and internal projects for a period of 5 years. During this period, he also delivered several SAP courses as an instructor. He then moved on to end-user roles in FTSE 100 organisations, including PwC and Centrica. In PwC he was leading the integration team in a multimillion £ project, being the link between the front end and the back end teams. In Centrica, he spent over 10 years in different software development and design roles, through which he progressed to become Head of Integration in 2017. In this latter role, he was responsible for the management of all the integration teams in the organisation (10 teams and 50-60 people under his management responsibility). His teams were focusing on SAP, Microsoft, AWS, and other technologies delivering the integration components for hundreds of projects throughout his tenure, of a total value of £300+ m Euros per year (change-plan budget). Working alongside other architecture and design functions, Kostas defined and delivered key Integration Strategy and Technology Roadmaps for Centrica, which reshaped the organization’s IT estate, consisting of over 1000 applications. Kostas joined SPHYNX in April 2021, as its Chief Technology Officer.

Our solutions are based on our novel security assurance and certification platform and its advanced analytics and cyber intelligence.

You can find out more about which cookies we are using or switch them off in settings.

This website uses cookies so that we can provide you with the best user experience possible. Cookie information is stored in your browser and performs functions such as recognising you when you return to our website and helping our team to understand which sections of the website you find most interesting and useful.

Strictly Necessary Cookie should be enabled at all times so that we can save your preferences for cookie settings.

If you disable this cookie, we will not be able to save your preferences. This means that every time you visit this website you will need to enable or disable cookies again.